When to Use Blockchain in the Art Markets 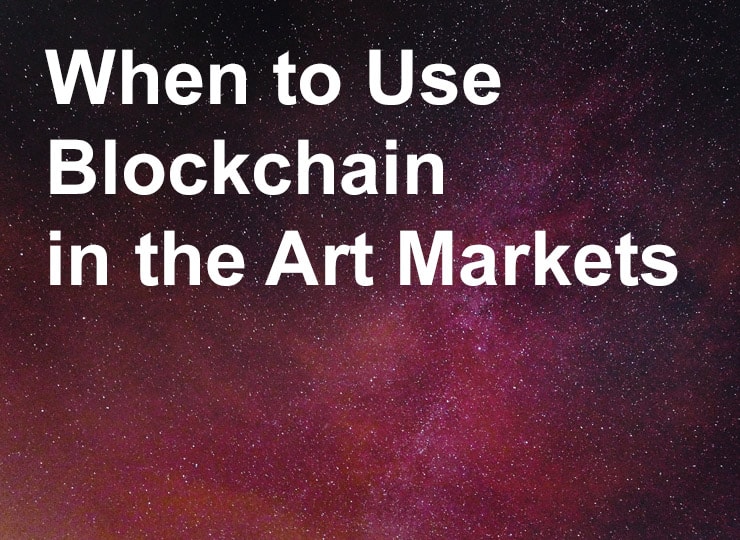 It seems 2018 is the year of the blockchain projects in the art markets. While many of the white papers for the efforts were published in 2017, 2018 is proving to be the peak in what Gartner, the tech industry analysis company, calls its hype curve.

ArtMarketGuru has already cataloged more than 30 projects addressing applications in the art market. The highest profile blockchain startups include Maecenas, Tend, Codex Protocol, and Feral Horses, among others.

The question remains, however: is blockchain really appropriate in every instance that new ventures promote a “solution” to art market ills?

Why Was Blockchain Invented? 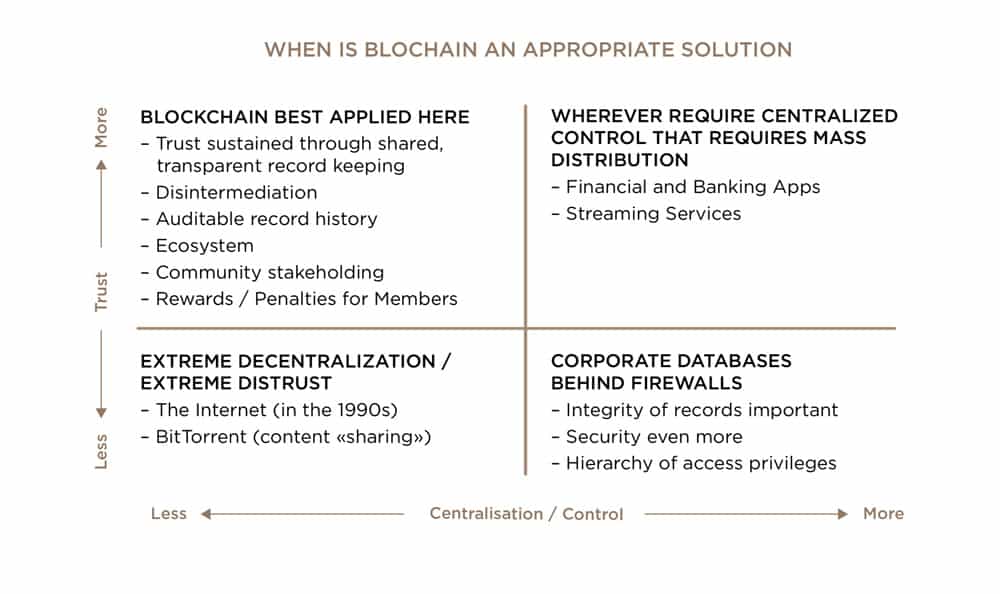 A Framework of Understanding

One way of looking at the efficacy of digital technology applications, then, is through the lens of Centralization vs Trust: to what degree is information locked up and controlled against the level to which users must trust the integrity of the information (see figure).

Nakamoto created blockchain technology and mined Bitcoin as a way for people to see where their money was coming from and where it was going. They regulated its value, they could follow the audit trails of transactions, and they could feel assured that the records were tamper-proof. No central authority controls the “truth” of the records; instead, transactions are visible to all through their local ledgers.

The best sort of applications in the art market for which blockchain is appropriate are those involving provenance: tracking the origin, sales, and ownership of individual art works.

Blockchain applications that seek to disintermediate auction houses can fit in this category, also: Codex Labs, Inc. is rolling out a blockchain-distributed app (dApp) called Biddable. The company intends Biddalbe to enable potential buyers who have been sidelined by traditional markets to join in the purchase of art and collectibles.

The internet itself (especially in the 1990s) is the best example of a digital technology in which information flows without boundaries. Individuals have to decide for themselves whether information unverified in an objective manner is true or not.

BitTorrent is another distributed technology in which users “share” content (movies, TV shows, books, and more) with others on the network. No one really knows if the quality of the content is usable, whether it is malware, or even if the content is legal. Nevertheless, millions of users around the world “share” content amongst themselves despite all the caveats.

The level of opaqueness of transactions in the art markets, however, precludes a “sharing” technology platform.

Corporate Information Technology (IT) departments thrive in this context: they maintain highly centralized databases of (usually) sensitive data that, if exposed outside certain boundaries, could do harm to the organization. This sort of client/server architecture requires that users have a hierarchy of privileges to access and manipulate the records in the data stores. IT departments in museums, large art galleries, and auction houses segment information on a need-to-know basis and ring the databases to outside intrusion with firewalls.

Banking customers must trust that the banking apps through which they access their money are secure from prying eyes and from intrusion. Banks have a Herculean challenge to maintain a high level of integrity and security of the billions of transactions and millions of records of private information that flow between the institutions and the outside world.

However, the High Trust / High Centralization model has become bloated with intermediaries who have created vulnerabilities to the integrity of the information and increased the costs of doing business through the institutions. It is this context against which Nakamoto created Bitcoin: a way to cut the middlemen and the central banks out of community economies.

Blockchain can Disrupt the Art Market

Blockchain for the art markets, then, has best-fit applications. The technology is not a solution for all seasons (or contexts). It is suited for ecosystems in which stakeholders have their own interests but accept they have to trust each other at some level in order to interact (like Codex Protocol).

While centralization and Authority have historically dictated the terms of trust, blockchain offers a way for stakeholders to engage each other with a high level of trust and a minimum of intermediaries and Authority figures, as you find in the art market.

One thought on “When to Use Blockchain in the Art Markets”