Cryptocurrencies in the Art Markets 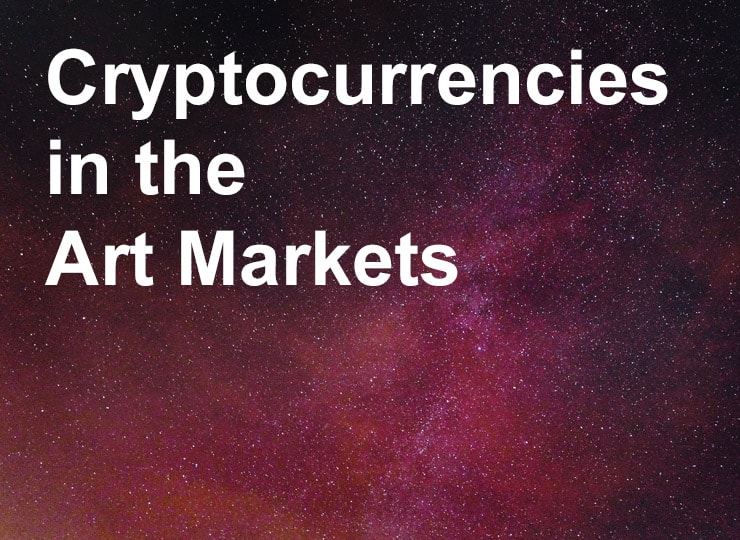 Digital currencies abound in the art market: Bitcoin, Ether, CodexCoin, Bitchcoin, ART, and many more. The plethora of digital currencies that blockchain projects are pitching to investors and consumers seems overwhelming. Technology ventures intend the digital currencies – also known as cryptocurrencies – to act as a tender for blockchain applications. Many tech startups promise stakeholders payouts if they convert their dollars or euros or pounds – any fiat currency backed by a national government, really — into the local blockchain currency.

The cryptocurrencies in some blockchain projects also serve as ways to regulate the micro-economies, promising rewards for good behavior, and punishments (i.e., loss of funds) for activities that violate blockchain community rules. Other uses of cryptocurrencies involve taking fractional shares in pieces of art.

The question arises, however, that if investors and stakeholders must convert a fiat currency into a digital currency to participate in a blockchain community – and then convert the digital currency back into the fiat currency to cash out — why introduce a cryptocurrency at all into the project? When does it make sense for a blockchain implementation to tie stakeholders into a local cryptocurrency?

Why Were Cryptocurrencies Invented?

The alleged inventor of blockchain technology is Satoshi Nakamoto, a pseudonym. He/they meant blockchain to be a distributed ledger of linked records for which every user in the blockchain receives updates to the records. Bitcoin was born in a blockchain environment as a counterpoint to the control that central banks exerted over economies. Nakamoto meant blockchain to support economies based in the transparency and immutability of transactions, free of a central authority. 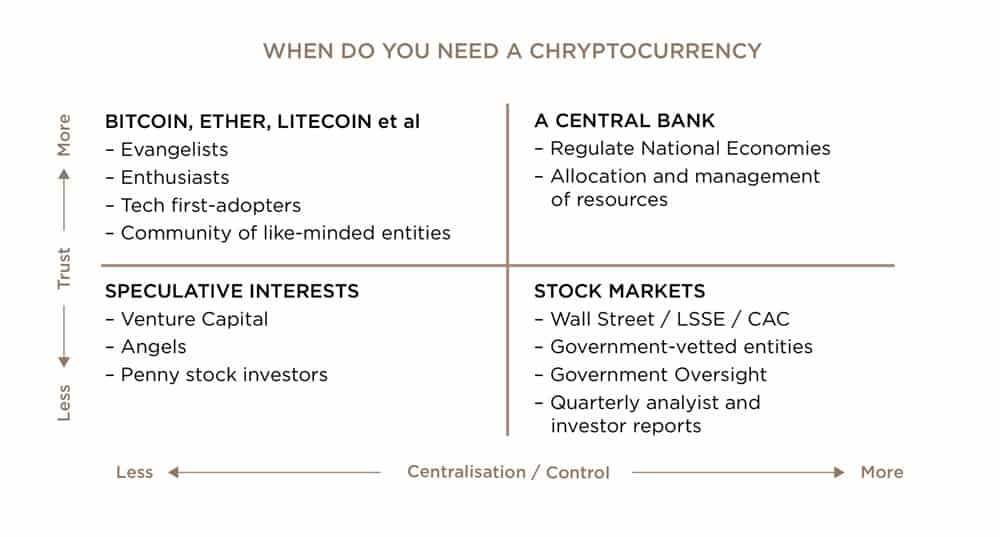 A Framework of Understanding

One way of looking at the efficacy of cryptocurrencies, then, is through the lens of Centralization vs Trust: to what degree is money locked up and controlled by gatekeepers against the level to which users must trust the integrity of the monetary transactions (see figure).

Nakamoto created blockchain technology and mined Bitcoin as a way for people to see where their money was coming from and where it was going. Bitcoin holders regulate the digital currency’s value through basic supply-demand economics, they could follow the audit trails of transactions, and they could feel assured that the records were tamper-proof. No central authority controls the “truth” of the transactions; instead, transactions are visible to all through their local ledgers.

The best sort of applications in the art market for which cryptocurrencies make sense are those that create ecosystems for blockchain participants. These sorts of environments have costs for transactions that community members pay in the coin of the realm (e.g., Ether for Ethereum blockchain transactions), and for encouragements and penalties. Digital art market blockchains for which artists maintain a royalty in work “tokenized” on a blockchain. Artlery falls into this category.

The blockchain platform Codex Protocol positions its art registry as an ecosystem with which other applications can integrate to draw on records of authentication and provenance. They use a monetized digital token to reward users for activities that have a positive impact on the ecosystem and penalize those who have gone against the regulations of the platform.

Blockchain projects (which are inherently decentralized) in which stakeholders have a low level of trust in the business and/or each other are akin to the Wild West. Blockchain investments of this sort are speculative: stakeholders do not know the outcome of the fiat value of the cryptocoins in which they’ve invested. Investors who take stakes in these blockchain ventures sometimes intend to “short” the value of the cryptocurrency.

They will “sell” their stake at what they believe to be a peak value for the digital currency in order to make a profit. In the brick-and-mortar world penny stocks and the company stocks of developing countries are particularly vulnerable to speculation and short selling.

Wall Street, any national bourse like the New York Stock Exchange (NYSE), the NASDAQ, London’s FTSE, the Paris NYSE Euronext (NYX) are highly centralized market places for buying, selling, and trading shares. Government agencies, investors, and industry analysts vet the companies traded on the bourses. Though individuals can invest in stocks on the exchanges, large institutional investors create most of the value of the company stocks.

Even with “blue chip” companies like General Electric, TOTAL of France, or Walgreens Boots, to name just a few, trust can run low among investors. A combination of leadership, market, public relations, and geopolitical mishaps can easily disappoint analysts and investors to plunge the value of company shares.

National and regional governments, political representatives, and even the citizens of countries place a great deal of trust in their central banks. The world looks on anxiously to find out what the Federal Reserve of the United States will do next, or how long it will take the European Central Bank to unwind its monetary policy. Central banks are the bulwarks of stable national economies and banking systems.

They are slow-moving, bureaucratic, even sclerotic, some might say. It was with this observation that Nakamoto spawned a blockchain with the sole purpose of creating and circulating its own currency: Bitcoin. Untouched by central banking authorities and intermediaries, Bitcoin is the digital alternative to an economic condition that has been in place since the end of World War 2.

Ironically, however, Bitcoin and other digital currencies still require conversion to-and-from fiat currencies backed by central banks to legitimize any share and stakeholding in a blockchain community. Only when a national government sanctions a cryptocurrency in parallel with its fiat currency will any digital currency become viable in the real world. Until then, blockchain users in the art market should be aware of currency fluctuations and conversion fees.