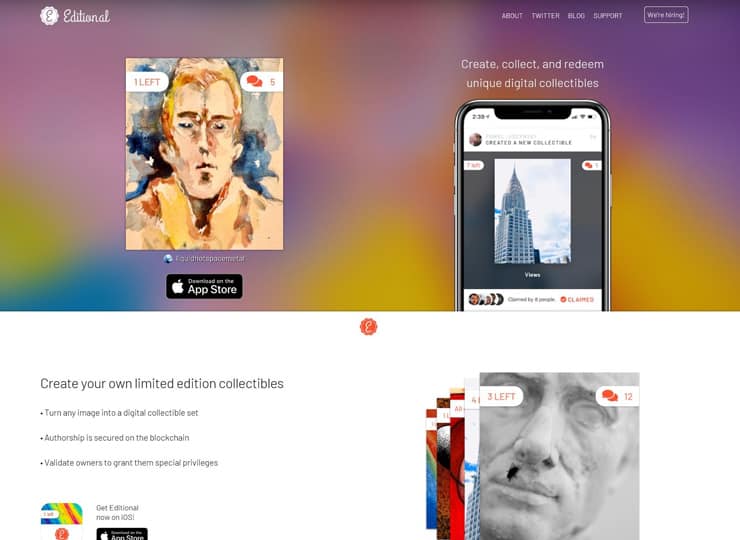 On April 30, 2019, Editional, a start-up based in New York announced it had raised US$1.5 million with notable investors including ConsenSys Ventures, Digital Currency Group, and CoinFund. The company launched a blockchain-powered interactive social platform where digital artists or creators can showcase their work and actively engage with a community of collectors. CEO John Egan, a former Facebook product manager, believes that there is a growing interest in digital collectibles and a necessity to help millennials to get involved. He feels the need to create an application allowing anyone to create a file from their phone and share it with a community of collectors without having to learn about crypto-currency and blockchain technology. Jake Brukhman, Founder of CoinFund, said “Editional allows creators and curators to tokenize, collect, and monetize digital works of art like never before using blockchain technology. We hope this is a glimpse into the possibility of art markets of the future.”

Editional is a team of four based is New York and Montreal with strong experience in social media. They are hiring developers with a blockchain vision and enthusiasm.

Editional has gone live on Tuesday 30 April 2019 and it is available on the Apple App Store. We have tested the application for you. It is fairly easy to use. As a creator, once you have downloaded the application on your iPhone, you can create a collectible, set the number of editions and then share your work. Once you have pressed the “go button”, your collectible will show on the platform public feed. Anyone can see your creation and follow you. As creator and owner, you set the price of your collectible. All files are blockchain recorded. As a fan, you can follow creators and collect their digital files. Collectors receive an alert whenever one of their creators has posted a new file. If collectors are fast enough, they will claim that file using the “claim button”. The idea is to create a community around creators. The core experience is the creation and distribution of digital assets.

At the moment, Editional is free. The prime objective is not to make money. It is to create a community. “We don’t make money on this project; our goal is to create the community”, John Egan told us. “We do not worry too much about that at this stage”. Editional management shall revisit the revenue model as it goes, depending how people respond to the project. Editional application integrates with other blockchain dApps like OpenSea, where owners of collectibles can sell their items on the open digital marketplace. Editional also provides each user with a personal Ethereum wallet address to securely store all of their collectibles at no cost.

Could you please present yourself, your team and investors?

We’re a group of serial entrepreneurs and former early Facebook employees building products that make digital content creation and ownership accessible to the world.  We’re based out of New York City and our investors include ConsenSys, FirstMark, DCG, Unusual, Raptor, and Coinfund.

Full bios and investor list are available at https://editional.com/about

What brought you to launch Editional?

We had previously built a blockchain wallet app and noticed that people were most excited about the digital collectibles that were becoming popular inside blockchain games.  We saw a few signs that artists and creatives could benefit by distributing copies of their work on the blockchain but the barriers to entry at the time for a non-engineer to participate in the early economy were very high. Editional was born of the idea that anyone should have the ability to create, distribute, and own digital content.

What is the size of your market?

We think Editional should be accessible to everyone in the world.  Ideally we’re both enabling existing creators as well as those just getting started. The global art market is valued at around $70B and the global digital content market is worth well over $100B.

What makes you believe that collecting digital files is the future of collecting?

The underlying ownership network that powers Editional is a technology that, for the first time really, is providing a practical platform for portable digital ownership.

Just like if you buy a piece of art at a physical show you can move it around, take it with you, and even resell it elsewhere, people should have that freedom with digital ownership.  This hasn’t been true in the past.  You were locked into a single product with limited capability to use the digital things you own.

When you claim and own something on Editional, however, all other applications that respect the ownership network (for example, the Opensea marketplace) are instantly knowledgeable of and respect your rights to that content.

You are making the difference between “buying” and “collecting”. You say that collectors do not “buy” but “collect” digital collectibles. Could you please expand on that?

To really get the system off the ground we’re focused on letting anyone create on the platform and claim for free.  The scarcity of an item has more to do with its demand than price initially.  For example, when a popular artist posts 10 editions of a new work on Editional, they’re gone almost immediately.  The new owners can trade or sell on the secondary market to those who weren’t fast enough to get an edition of their own, or they can keep the item for themselves in their personal collections.

The application is currently free. What are your possible revenue models?

We’re not really focused on the revenue side of things right now.  It’s more important to create something that people want and can use without barrier.  We’re very fortunate to be well funded by investors who share our long-term vision.

Could you please discuss your business plan?

Our goal is ultimately to empower digital creators and owners.  We want to give them the best tools to participate in this new digital economy freely and without hindrance.

In the short term we’re focused on giving collectors the best discovery experience and creators the best distribution experience.  That means adding features for collectors that have to do with how they build, show off, and grow their collections.  For creators we’re working on tools for helping them maintain long-term relationships with owners of their work and experimenting with other distribution models beyond the simple rush-to-claim model we have today.