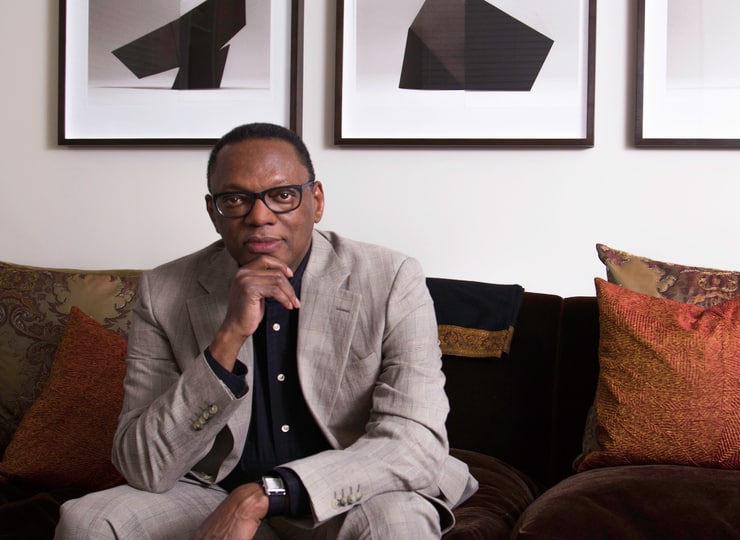 How has your financial expertise guided your art collection? Would you say that it helps or hinders you when deciding whether to buy a piece of work?

I have limits because I recognise that art can cost a lot of money. Sometimes I will set an annual limit, and will either buy only one or two pieces. I think it’s easy when you’re a young collector or someone who’s just starting out, to spend your money on lots of little things and end up with fifteen or so small pieces of art. I think it’s better to save money that you would have spent on the little things and buy one great thing with it that can really have the potential when the artist takes off of developing great value. The little things are easy to buy, like buying candy in a shop, and that can be dangerous.

When you’ve been in business and in the art market for a long time, you develop a weird balance of recognising when somebody is a ‘comer’, an artist who has the buzz, and who’s work is distinctive. There’s something there that lets you know it’s probably a better than average opportunity that this artist will go up in value. You don’t let it shape your decision but it definitely is a part of the business mind-set. You only get that from previous experience. I always say that if I buy a piece of art and the decision comes completely from my head, then I’m completely wrong. If the art is resonating in my gut, my stomach, and I’m feeling nauseous then that is more real. It’s touching things that are experiential in me that I can’t quite quantify. It’s when it’s in my head and it becomes rationalised that it’s a bad decision.

The other way in which my work and experience in finance impacts my art collecting is when I sell. Sometimes a work has become so valuable and the cost of the insurance has gone up so much that it’s time to let it go. Then what I do is to take a certain percentage of the sale and use it to buy a young emerging artist, someone who is still alive. I always try to put the money back into art.

Tell me about your collection. How did you get started? Was there a particular piece that inspired your hunger?

I think I’m a collector by nature. Being raised poor, all I collected were marbles and Quaker Oat boxes. I used to play marbles, which I liked because when I won I would get to keep the marbles, but I’ve always been interested in collecting something, whether it was Anglo-Japanism when I didn’t have any money or snapshots. I used to go to flea markets and spend ages going through boxes of old snapshots to collect things that reflected small social events like small town fairs and festivals.

In terms of art there were two main things that occurred. Firstly, I was influenced by meeting Richard Faughan who taught photography at Sun Valley in Idaho. Richard was a good photographer but he wanted to be a watercolourist. His watercolours were ok but his photography was very good. It was from Richard that I learned how to look at photography in particular. Then, when I moved to New York city in 1982, I had the great fortune of meeting Marvin Heiferman, who worked at Leo Castelli Gallery. Marvin and I became friends and I would go around with Marvin to look at photography, buying my first prints, the most important from that period probably being Lichtenstein. I also bought Nan Goldin and Frank Majore from that time. Marvin was key at opening my eyes to the world of art, before I gained the confidence to go out on my own; the trick that I learnt from Marvin was just to look. You have to look and read and ask questions. I’m not shy at expressing opinions and I react very strongly to things.

I am aware that the value of art, especially when it gets above a certain number, is about the rarity of it. It becomes in essence a rare commodity by a talented person. I think it gives me a really realistic understanding of the commercial side of art. I had a discussion recently with a woman who said to me “oh I can’t deal with the commercial side of art, I can’t stand it”. Well, that’s why you have a dealer or a gallerist! They deal with that and you as an artist are removed from that. I see art, the whole classification of art, as an asset class, which wasn’t the case when I started. Now art is an asset class, which means that when you are putting together your investment portfolio, not only are there shares, bonds, maybe a commodity of some kind, now there is art as an asset class in itself. Now you have all of these art advisory services who will help you to get a loan based on your collection. So you have to be very aware of it as an asset class. You also have to be aware that everything is cyclical. Every artist goes up and down. Some people are lucky to sell at the peak of an artist, some are not.

I view art in terms of the global economy. I recognise that it’s now a global asset class for people of a certain tier; for a very wealthy person, it is certainly an asset class.

The thing with art is that people fall in and out of favour. There is no guarantee that once they fall out of favour they will come back into favour. Looking at art as an asset class, it is risky, which is why most rich people buy art from auction. If you are buying as an investment you need to know that there is a second market to sell to. If you’re building a collection then you can buy from the primary or secondary market.

Does the world of collecting contemporary art inspire or influence your creation of training courses in any way? Are there any lessons that you have been able to translate from the art world to the worlds of finance and education?

The training programs that I design for the financial market are always imbued with two aspects of my life in mind: my love of literature and my love of art. I think what has made me effective as a trainer on Wall Street and made me distinct and memorable, is the fact that I can bring these analogies and images from the art world and make something that it is financial and abstract tied to something that is unexpected. It creates imagery that is always effective.

I’ve done a series of art programmes on radio and people always question that translation of the visual to the audible, whereas actually it’s the most interesting thing. It’s about getting the person you’re interviewing or describing that particular work in a way that even if they are driving in their car, or sitting on the train with their headphones on, it will conjure up a really concrete image for them.

Art is both what inspires ideas and lets me see other people’s ideas and how they work them out. I try to bring that thinking and that performative aspect into my classes. Talking about the art world has definitely influenced my teaching, absolutely.

What is your opinion on the current art market? Is there anything that you particularly are keeping an eye on right now?

When I started collecting, a lot of artists had second jobs. They would be plasters or builders on the side to support their art. Now, I think a lot of artists feel entitled to live off their art, that their art should provide sufficient income from the very beginning. Hence, the price of much new art is very high, and I find that difficult. There are so many people chasing the new work and the new artists who could become big that it’s creating a bubble effect. They have a first flush and then after their third of fourth show they become repetitive. They lack depth and subsequently disappear. I think in this respect that the artist’s cycle has become a lot shorter. A lot of artists in the contemporary art world are trying to work out what the formula is that will make them successful, and I think that puts you in a very narrow track from the beginning, purely focused on sales. You either have the talent or you don’t.

Confidence is very different from arrogance and entitlement. I think you can be confident as an artist, you can say what you think and that’s fine. The difficulty occurs when you start thinking of yourself as a ‘somebody’ who deserves something.