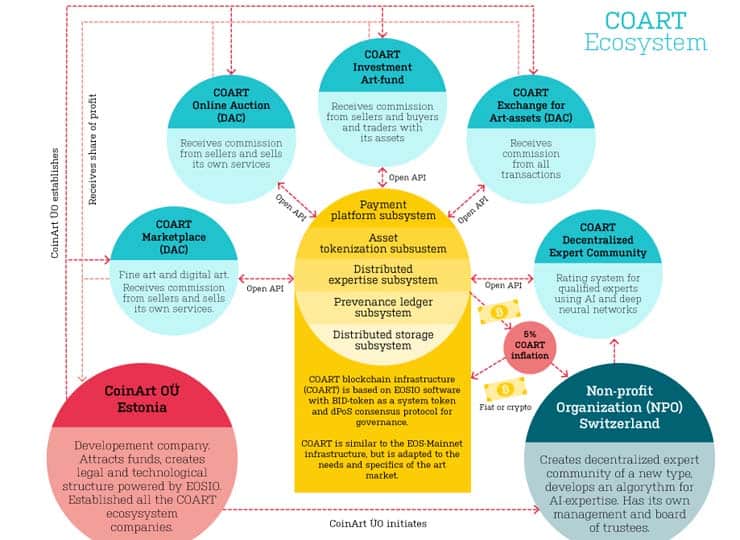 COART, which stands for Collaborative Art, is an open source platform designed for art investment based on EOISIO-software. The platform introduces a new approach to the global art market for collectors, art dealers, gallery owners, auction houses, museums and art experts. They aim to connect key players, no matter how experienced or wealthy, by taking advantage of the technological capabilities of the rapidly growing markets. Dmitrii Slabodchikov is the Founder and CEO of COART and has years of experience of working in different sectors of the art market.

Hello Dmitrii, thank you for agreeing to talk to us.

Can you tell us a bit about your background and how COART came about?

I moved to St Petersburg when I was six years old and loved visiting the Hermitage Collection. It was around this time that my passion for art started. I went on to study art and nearly became a sculptor, however, I decided that I would be better suited to go down the business route.

Around this time Russia was going through a transformative period and it looked as though it might become democratic, unfortunately this did not happen. As a result I emigrated to Lithuania and became CEO at an event’s agency, Art of Choice. Here, we managed events for high-net-worth individuals and I became acquainted with many prominent figures in the art world. I also began to collect and sell artworks to contacts I had made, this really allowed me to learn the inner workings of the art market before starting COART. It is also when I realised that aspects of the art market’s ecosystem were severely outdated and did not correspond to client’s needs. There is a distinct lack of transparency, whilst the market also remains highly exclusive making it difficult for emerging artists and new investors to gain access.

COART is building a new relationship system, offering equal opportunities to all investors and traders. I worked on the COART business model for about two and a half years before I became properly acquainted with blockchain technology. It was last year’s buzz around blockchain that drew my attention to the technology which coincidently fit very well with the business model which we were starting to develop at the time.

You have mentioned that COART’s system resembles business models of existing online auctions such as Paddle8 and Maecenas what are the similarities?

Yes, there are many projects out there at the moment seeking to change the art market through the implementation of blockchain technology. The art market is probably the largest of the legal, but non-transparent markets in the world. There is a huge shadow turnover and problems with forgeries and double sales. Our mission is to make the market more transparent, therefore we believe it is important for us to stay in contact with companies who are working towards similar goals.

Maecenas is widely heard of as they were behind the first auction which sold fractional shares of an artwork. They were the first to take this idea and announce it to the world, however, in my opinion they still lack clarity on the secondary market.

Paddle8 is a great project, launched about five years ago without the use of blockchain. They are now developing their own blockchain based solution with a specialist Swiss company so it will be interesting to see how this unfolds. They are becoming a key player in the art market judging by what they have achieved so far.

We recently published an article analysing Maecenas’s art currency and the recent decline in cryptocurrencies. How do you think Maecenas will fair?

I think the ICO boom of last year can only last for a limited amount of time. A recent report from Ernst and Young confirms my theses, they analysed 86 projects that raised funds for ICO in 2017 and found that 71% did not have a working product supplying the market. At the same time, most of the coins issued by companies for ICO should have been used as a means of paying for services in the systems they are building.

Some of those who did create a working product began to accept payments in traditional currencies as well as ICO which instantly reduced the value of their tokens to investors.  Some companies even stopped accepting their own tokens as a means of payments which made people even more cautious about blockchain-based projects.

Taking this into consideration, I would like to point out that COART’s BID-token is not intended for crypto trading, but is a system unit created specifically to aid the functioning of the ecosystem. We have estimated its cost at $ 0.08 and assume that it can increase in value by two to three times, however, this is not integral to our project. Value carriers within the COART Ecosystem are not BID-tokens, but digital certificates of possession.

As for the future of Maecenas, I am not sure whether they know themselves what the next step is with their tokens, but it will be interesting to see what happens.

How is COART different from other blockchain based companies?

To try and put it simply, we aim to connect all sectors of the art market using new technologies such as blockchain, artificial intelligence and deep neural nets with machine learning. Unlike most existing projects which use  the Ethereum platform, we are creating a totally new ecosystem based on EOSIO software.

Next year hundreds of new projects from all over the world will be able to connect  via OpneAPI to the COART blockchain infrastructure. I am not aware of any other companies that are enabling this at the moment.

Can you talk more about how you are hoping to work alongside traditional museums, galleries and auction houses?

Collaboration with museums, galleries and auction houses is a very important element of the COART ecosystem.

We plan to offer loans to museums so that they can include high level art objects in exhibitions that will have been acquired by tens of thousands of investors using co-investment mechanisms offered by the COART Investment Art-Fund.

COART will provide access to works previously hidden in private collections or closed vaults. As part of the Renaissance 2.0 movement, supported by COART   which among other things creates an expert community using AI in its work.

As for auction houses, we plan to bring a new group of investors to them. It has been shown that direct access of retail investors and traders in top level trading can increase the financial turnover of the art market several times over. COART plans to work with leading auction houses to provide legal and financial access to auctions for smaller investors.

It has been announced that you will be releasing a new version of your Whitepaper. Can you reveal any changes you will be making?

Yes, we have a new version of WP v.1.8 r and have significantly changed the content of the site. We have begun a general redesign in preparation for our first special event scheduled for December in London and Switzerland. I think everyone interested in the synthesis of Art and new technologies should visit the site and, if you want to understand the Ecosystem model deeply, read the WP.

Are you planning any future collaborations?

Yes, of course. We would like to have an open to dialogue with all players of the market. This spans across the art market to the financial and investment markets as well as the blockchain industry.

How do you hope COART will develop in the coming years?

Our goal for the next 5 years is to have 10% of the total online sales of the global art market.