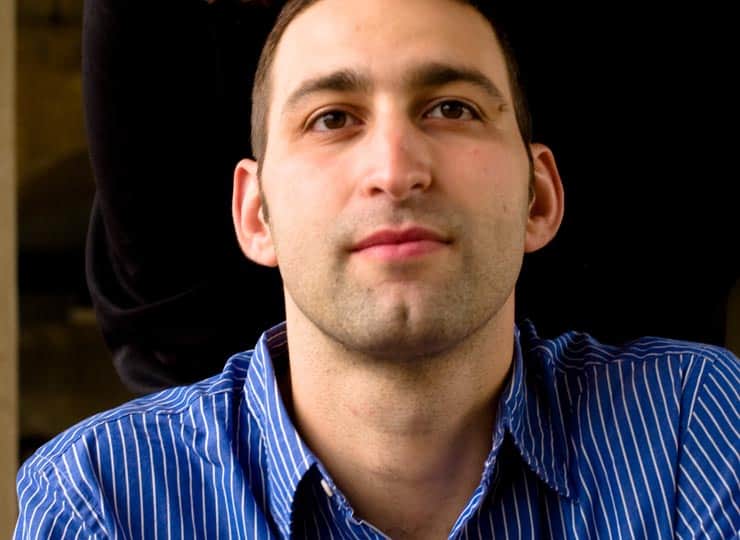 Daniel Doubrovkine is the CTO of Artsy, the largest online global marketplace for art and the most read online art publication. The company’s mission is to expand the art market to support more artists and art in the world. Having worked in both small and large software companies since the mid-nineties Doubrovkine is a highly experienced software leader and engineer. He is also an artist and, more recently, an obsessive runner.

Doubrovkine took part in the Christie’s Art + Tech Summit on Tuesday 17th July speaking on the subject of The Future is Art.

Hello Daniel, we have been looking forward to meeting you.

To start with, could you please tell us a little bit about yourself? When did you join Artsy? What have been your personal achievements?

I was born in Moscow, former USSR. My family included famous propaganda writers, a poetry translator and many teachers and we were surrounded by art. With some luck my parents and I emigrated to Switzerland and I ended up going to high school in college in Geneva in the early days of the Internet. I got a job at Microsoft in 1999 in Seattle, then quit to move to New York in 2004 where I have been living ever since. In 2010 I walked into a coworking space where Carter Cleveland, the CEO and founder of a tiny company called Artsy had two desks and a handful of incredible collaborators. The contagious energy of these people sucked me in and I couldn’t have made a better choice.

My team has built everything you see and much that you don’t see on Artsy. It has also been an amazing personal journey. Having my hand in creating a thriving marketplace and an inspiring publication out of nothing, in a way compatible with my own values, and seeing the positive impact it has had in the world is something I’m truly proud of.

How would you compare Artsy with its main competitors?

Artsy truly stands out as it has little competition, by design. We always felt that the art world could become a lot bigger and hence competing with existing players would have been self-defeating. After having built the foundational Art Genome Project we looked for a business model that would bring additional value to the entire art ecosystem and naturally became a partner rather than a disruptor. This has paid off tremendously and we have succeeded at bringing the art world online at large through partnerships with 2,700 galleries,, 800+ institutions and, 25+ major auction houses using Artsy as a platform to reach hundreds of thousands of collectors and millions of art enthusiasts, globally. We’re committed to continuing on this path of partnership.

How has Artsy evolved since its conception? What have been the most exciting developments?

There were many significant Artsy milestones with regards to technology. There was a moment in 2012 when we launched The Art Genome Project and users began spending a lot of time on the site with a promising endorsement by The New York Times. 2013 marked a partnership with The Armory Show and our first coverage of the Venice Biennale. We also saw the first collector inquiries to galleries, which in 2014 amounted to inquiries on billions of dollars worth of art. That year we also built technology to run benefit auctions and by 2016 were partnering with commercial auction houses through an ambitious live bidding system with exceptional user experience that we have built from scratch, and that has proven to be a real competitive advantage. In 2017 we became the largest art publication online by innovating quickly with content presentation through a homegrown CMS.

What was the process like building the Artsy website in comparison to other projects you have been involved in?

Artsy is of course a website and an app, but that’s simply the tip of the iceberg. It’s not a project in a traditional sense. It doesn’t have a clear set of well-understood requirements or a timeline for execution. We didn’t know that we would be a marketplace in 2011, so we modeled the many parts of the art world in software and then built products on top of that hand-in-hand with business opportunities. As a mission-driven company we value our core principles of partnering with the art world and are pursuing the goal of making art easier to buy. We’re constantly innovating to that effect and are building new offerings very quickly. To summarize, Artsy is a traditional tech startup in every way and it breathes and lives technology at all levels.

AI can be very powerful, but Artsy uses almost no AI per-se. We do rely heavily on humans. The Art Genome project is a “nearest neighbor” problem in which you have to calculate a “distance” between independent features, called “genes”. But these features, such as whether the artwork belongs to the Young British Artists movement, are entirely entered by hand by a team of art historians. The humans make the biggest difference in data quality, helped with some machines when it comes to manipulating large data sets.

We do apply a significant amount of machine learning and other statistical tools in various opportune places. For example, we have a very powerful data pipeline that, combined with machine learning, can generate near real-time recommendations of works you might be interested in.

Christie’s Art + Tech Summit was an extremely interesting event that helped highlight issues around Art and Blockchain. Did you take away anything from the conference? Do you believe that blockchain technology will impact the art world? And how will it impact the art market?

My favorite talk at the conference was Kevin Abosh’s “Bleeding for Blockchain”. Artists are already using blockchain as a medium and hence this technology is directly impacting the art world.

How blockchain will impact the art market remains to be seen. I am evaluating blockchain products and projects the same way I evaluate any technology: does it solve a real problem and is there another, simpler way to do achieve the same thing? You can see how Kevin’s art could not exist without blockchain and therefore his application is a “yes” on both questions. Most other blockchain projects are most likely a “no”.

What’s more important is that a 252 year old institutions put together a forward-looking technology conference, opened by the Christie’s CEO, Guillaume Cerutti. I will credit the really smart people at Christie’s, especially CIO Richard Entrup, with marking a pivotal moment in which the largest art business successfully transitioned from being behind on tech, to being a technology leader. I was humbled by being invited to speak at the conference.

Many start-ups are embracing new technologies such as blockchain, artificial intelligence, virtual and augmented reality. Are you following any of these start-ups in particular?

I am paying close attention to crypto-enabled marketplaces and natively digital art. Most are very similar to galleries today and are starting to invest more in working with creators.

Artsy is also very engaged with AR tech, having partnered with Microsoft and Studio Drift on a piece called “Concrete Storm” during last year’s Armory Show and having released an AR “View in Room” in our own app. We also got to try Magic Leap a few months ago and are excited for its recent launch. AR, VR and blockchain are truly innovative art mediums.

Much of this tech is very young and very smart people are working on it. Technology history tells us that disruption happens slowly, then happens very fast. Therefore I am always dedicating a significant amount of resources within emerging tech.

Following on from my last question, VR allows for collectors and buyers to view art in three dimensions without having the tangible object there. How far do you think it can go in terms of helping galleries, dealers and auction houses develop their market? Will it ever replace the act of going to a sale or a gallery and viewing the work in the flesh?

In 2011 many museums were worried that technology and the Internet could cannibalize their foot traffic. Instead, apps such as Instagram have had a massively positive impact on the fact that record numbers of people are visiting these museums today. Technology and social media are an incredible multiplier. In my opinion, AR and VR fall in the same category.

We have been actively working on VR/AR tech. In 2013 we prototyped a virtual gallery with a major Chelsea gallery partner and a 3D modeling real-estate company. In 2011 Artsy released an app during Art Basel in Switzerland that could recognize a painting in real-time using an image from your phone’s camera and this year our iPhone app has replaced a 2D “View in Room” with a 3D augmented reality version – you can now hang a virtual painting or photograph on your own wall and it works remarkably well. This is not a revolution – these are useful tools to get a better sense of a work’s dimensions or color. I am confident that they will never replace the act of visiting a work in the flesh.

In another related example we saw millions of people engage with our 3D film series about for the 57th Venice Biennale presented in partnership with UBS. I encourage everyone, including galleries and auction houses, to focus on storytelling and to be innovative in the use of new media in enabling new kinds of creative experiences.

What do you think of “art tokenization”?

The idea that we can divide objects into tokens and trade these tokens is not new, but the technology is finally here to actually enable that at scale. I compare art tokenization mechanisms being developed today to real-estate REITs with some small improvements and a lot more risk and new questions. I don’t claim to fully understand REITs, so I focus on the people involved over the technology being built.

Have you been affected by GDPR?

We’ve always approached our customers’ privacy “by design”. GDPR gave us an opportunity to improve further and to evaluate whether additional revisions needed to be made.

Can you tell us about any plans or collaborations for Artsy in the future?

2018 is our 4th year working with UBS on various content collaborations and I am particularly excited about what’s coming this fall on the intersection of topics relating to women in art and technology. Stay tuned!