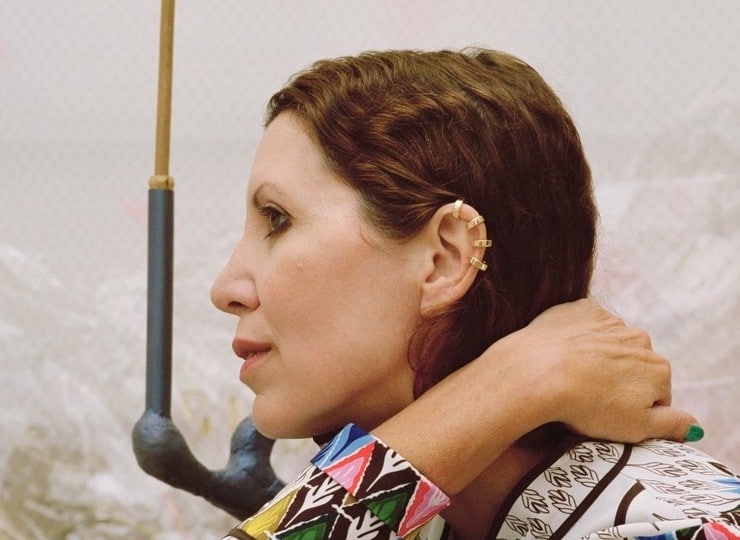 Tell us about your collection. How did you get started?

I started collecting in 1997 when I was living in New York. I was completing a Master’s degree in Fashion at the Fashion Institute of Technology (FIT) at the time, after doing my undergrad at NYU in Journalism. When I started the Master’s degree it was the mid-90’s, and was a really magical moment for contemporary art and for new artists coming out.

I originally started with no agenda, and just wanted to learn how the work of contemporary artists functioned. After a number of years, listening, going to galleries, and having a lot of interesting discussions, I gradually began to understand how the art market worked and started collecting. I was really engaged, excited and interested, particularly as a lot of the artists who were emerging (such as Cindy Sherman, Barbara Kruger etc.) were strong women. It was very exciting for me to see these new languages and to see the type of quality of work in practice.

The very first work I bought was by a female artist, totally unknown nowadays; Carol Shadford. I wanted to support female artists who were very underrepresented in galleries at the time. As a feminist, I believe in equal opportunities, and since the beginning had decided that I wanted to focus my collection on female artists. I really felt that it was such a magical and eye-opening time for me that I knew I was going to be an occasional buyer, with the help of a bit of luck in the auction houses.

So, I began my collection of female voices, those who were unheard and who had been silenced throughout art history. People can focus collections on many things, from periods of history and geographic realities to buying works just of a particular medium. My focus is not medium driven, which allows me to feel the freedom to express myself with my collection. I believe that my passion is expressed through my collection and that it’s a journey of discovering talented artists; what I believe in is talent above all.

Around 50% of what I do is art patronage. I know 99.9% of the artists in my collection personally which was part of my desire to be very close to the art and the art community. The art market and the art world community is where a lot of my energy goes into, particularly when it comes to supporting artists and gallerists. I don’t buy established artists because what I do is about making an impact in an artist’s life; I want to enter the life of an artist as a collector when no one else is looking at them and they need the attention the most. It’s the same with the organisations that I support, most of them are young, not for profit, small organisations that really don’t get a lot of support from people because they are not like the big machines that we see out there. At the moment, all the money in the art market goes to the top end of the pyramid, causing smaller and middle-sized galleries to close down. We need more support to give more organisation that may give unrecognised artists the freedom and space to express themselves and be radical and to become the artists that will then go on to exhibit in the Tate or the MoMA.

What do you think is the state of the current art market?

The contemporary art market is booming in a way, and has been for the last few years, but the attention always goes to the established artists. There is a lot of speculation around the money going toward the most well-known artists and those who are in the middle of their career who are suffering and people don’t go to galleries anymore, they go to art fairs instead. The idea of becoming an art collector is very strange, it is not just a weekend affair, it’s really a twenty-four seven job throughout the year. It’s taking its toll not only on galleries but also gallerists themselves who are required to do art fairs, to meet people and become connected with people in order to sell and the cannot afford it. There are galleries who just do fairs which in my opinion is totally wrong. Artists need a sense of community that art fairs do not offer. Artists cannot just be traded; artist’s values are raised because of the history and the society they work within and not because of a previous auction sale. You have to justify in the longer term an artist who has not necessarily exhibited in a museum show before.

Can you tell us about “XX” and your work with the Contemporary Art Society?

The XX initiative was launched after almost twenty years of me collecting and supporting female artists, I wanted to formalise what I was doing and make it more visible. XX stands for the female chromosomes as well as for partnership and collaboration. All that I have done is focused on collaboration and supporting others and this initiative is no exception. It’s amazing the type of synergy that I have with the Contemporary Art Society partnership. My idea was to place work by a young, overlooked female artist in a gallery space. I then extended this idea to New York. The Contemporary Art Society was perfect as it was always led by a strong female director which fit with the vision that I myself was striving for. What XX Cultural Centre does is to fully fund a major commission by an artist in the context of a solo exhibition at the cultural centre. The first commission was by Anthea Hamilton, the now infamous large rear end presented as part of a shortlist for 2016’s Turner Prize –  Project for a Door (After Gaetano Pesce). There is a process with the Cultural Centre of sitting down with the artist and discussing what her ambition is. I want to feel that ambition from the artist and I want them to use this money to do something that they haven’t had the chance to do until now, to experiment and be free from thinking about budgets. I’m engaged in the process and that’s very important.

The XX also partners on a one-off basis with other institutions from time to time.

What is it about art that is so powerful as a force for social change?

For me, art empowers people to dream. To look at realities that you would not otherwise experience. Artists create reality out of nothing, it’s something that changes your perspective of the world and the way you look at and engage with the world. When you walk into an incredible show you cannot describe what it is, all your senses are totally charged. It is a journey of personal growth that can be addictive. When you taste something so powerful, it makes you really value what you think about life. When you experience beauty on such a level, it is addictive. The power of art also challenges people’s preconceptions and teaches people that they can live their own life with their own dreams. Artists do this every day, they have the incredible gift of living their lives according to their own rules.