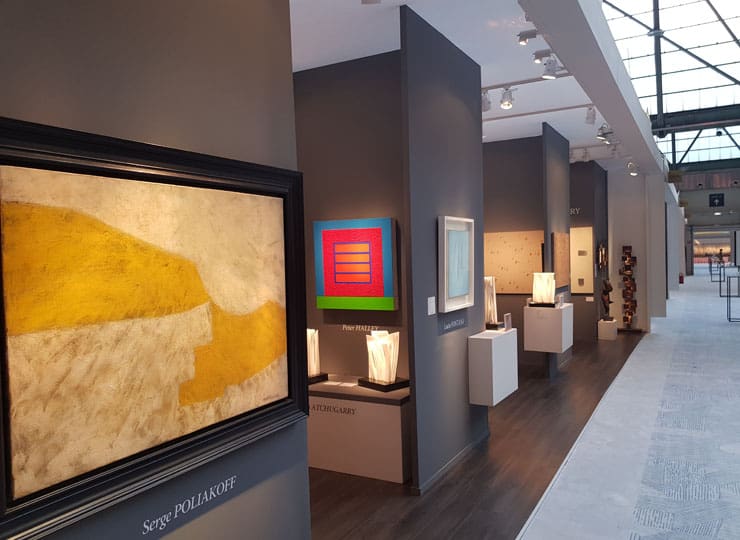 Art fairs have become a global phenomenon and play a vital role within the art market. Hundreds of art fairs take place, bringing artists, dealers, galleries and collectors together from all over the world, presenting abundant opportunities for all parties involved and satisfying the global thirst for art. Although not a new concept (art fairs have in fact been around since the 1800’s), it is only in fairly recent years that the buzz around fairs has reached a climax, with fairs not only boosting the art market, but the economies of their host cities. In fact, there now seems to be so many art fairs that the term ‘art fair fatigue’ was coined in 2018, attributing to the sheer volume of art fairs and the events that take place surrounding them that invitees will be expected to attend.

Heavyweight, international art fairs include Frieze which expanded to Los Angeles this year, Art Basel (Switzerland, Hong Kong, Buenos Aires and Miami), the Armory Show New York, TEFAF (Maastricht and New York), ARCO Madrid and Art Dubai. However, there are many successful art fairs which fall out of this bracket, London Art Fair is one of the longest standing art fairs having run for 31 years and makes a point of clearly marking all prices with many coming in at reasonable levels.

For many years it has been clear that the traditional art fair model is not the most democratic way of buying and selling art. Firstly, there is the extensive cost involved in securing a booth, travel and other associated expenses. These large costs have traditionally made it almost impossible for emerging artists to gain representation at an art fair, unless they are already represented by an established gallery. This has resulted in a conscious effort from many art fairs to be inclusive in representing a range of galleries and artists in turn creating a more diverse and dynamic experience. It was recently reported that Art Brussels have created a new section of their fair called Invited, whereby young galleries who are bringing something new to the industry and may not have the funds to participate otherwise, are given a booth with the costs covered by the fair.

The Accessible Art Fair, founded by Stephanie Manasseh in 2006 has been breaking the mould since its conception. Manasseh who has 16 years of experience working in the art industry remarked that she was taken aback when she first started working on art fairs that the artists seemed to be cut out of the experience entirely. She made it her mission to change this when she created ACAF, a high-end platform that offers artist without gallery representation the chance to exhibit. Artists represent themselves entirely – meaning they arrange their own booth and have complete creative ownership over what is presented. All works are priced below 20,000 euros. If artists get through the selection process like all art fair models there is a fee involved, this can vary from 1000 – 5000 euros depending on the exhibition stand size. ACAF does not take commissions on sales, with all the money going directly to the artist as opposed to the traditional model whereby the gallery would take a percentage of commission and the price would be higher.

“Although I may have seemed like a disruptor 13 years ago, I see that many people have followed suit and more and more people are seeing the value in meeting the artists and getting first hand insight into the works.”

ACAF also differs from the traditional art fair model as it regularly changes its location. Manasseh selects interesting venues to host the fair which have so far included hotels, a private members club housed in a mid-century building, the Jewish museum to celebrate their 10-year anniversary of re-opening the museum after the shootings in Brussels, and for the previous 3 years at Bozar, one of Brussels’ leading art institutions, an Art Nouveau building designed by Victor Horta.

Manasseh commented she had seen a “seismic shift in attitudes toward ACAF’s model as well as shifts in how artists work,” remarking, “there is no one model to sell art. Hundreds of different fairs and pop ups and events selling art in various ways. With the advent of social media, artists are depending less on galleries to solely represent them and are engaging in many activities, including fairs and selling platforms that the art world is now embracing. Gone are the days that the artists are fully dependant on the gallery to sell their works.”

The ACAF’s next edition will take place in Bozar, Brussels from the 10 -13 October. Mannaseh has put together an impressive panel of judges including Simon de Pury, Serge Tiroche, Shaune Arp and Sylvain Levy. ACAF are looking to expand to several cities with pop ups and are also looking forward to their New York edition which will take place in May 2020.

Can you tell us a bit about your background?

I am a Canadian curator and entrepreneur in the arts. I completed my studies at McGill University in Montreal and continued at Sotheby’s and Goldsmiths. I left my native Canada to settle in Europe in 1997. My passion has always been to elevate the status of unrepresented artists and offer them a high-end platform in which to showcase their works and to network with people who are responsive to buying art. I started the ACAF in 2006 in Brussels and set out to do just that and for the last 13 years I have had the opportunity to work with some extraordinary people in the arts. In 2015 and 2016 I had a wonderful opportunity to act as curator for BMW and implement their Art & Design Sessions. I had the chance to work with the late Marc Lagrange, Xavier Lust and the legendary Terry O’Neill. I really enjoy linking brands to art as I think that both benefit greatly by working together. Other examples of these professional and artistic partnerships have included American Express, BMW, Montblanc, Tiffany, Alfa Romeo and recently with The Bicester Shopping Collection. I have had several speaking engagements which I also enjoy which have included, The New York Times ‘Art For Tomorrow’ conference in Qatar, a Ted X talk and Central St Martins in London. I also recently directed a documentary about ACAF.

When was the Accessible Art Fair founded and what is its ethos?

I founded ACAF in 2006 and the ethos has always been to give a high end platform to artists without gallery representation and offer a place to exhibit, once chosen by the jury. All artwork is priced below 20,000 euro and many works are significantly lower. I also strive to offer visitors the opportunity to see the art in great venues that don’t necessarily fit what people would expect from an art fair. I have run the fair in hotels, private members’ clubs housed in a mid-century building, Jewish museum to celebrate our 10 year anniversary to re-open the museum after the shootings in Brussels, and for the last 3 years at Bozar, one of Brussels’ leading art institutions and a magnificent Art Nouveau building designed by Victor Horta.

How does it differ from the traditional art fair model?

The main difference at ACAF is that the artists are present and no gallery exhibits. When I first started going to art fairs 16 years ago, I was taken aback that the people who create the works and essentially are the people who have created the art industry are not welcome to participate in the fairs. I felt like it was almost an insult to the creators. I set out to change that and although I may have seemed like a disruptor 13 years ago, I see that many people have followed suit and more and more people are seeing the value in meeting the artists and getting first hand insight into the works.

What are the fees involved in participating in the ACAF as an artist?

Like all art fairs, ‘real estate’ costs money and artists (as galleries in traditional fairs) have to be charged to participate. Fees vary depending on city and stand size but range between 1000 and 5000 euros. We do not take commission on sales so all money goes to the artists. For the buyer, this can cut the cost in half from the traditional gallery and makes the art fair a very attractive place to acquire art.

How do you hope to make the experience less intimidating for buyers?

When you first started ACAF some people were unsure of artists representing themselves – how have you seen this attitude shift?

Since I started in 2006 I have seen a seismic shift in attitudes toward to ACAF’s model as well as shifts in how artists work. What we know now is that there is no one model to sell art. We see now hundreds of different fairs and pop ups and events selling art in various ways. With the advent of social media, artists are depending less on galleries to solely represent them and are engaging in many activities, including fairs and selling platforms that the art world is now embracing. Gone are the days that the artists are fully dependant on the gallery to sell their works.

How do you think the art fair will evolve in the next few years?

I am really pleased at how the fair has evolved in the last few years. I have set out to create a curated boutique fair where some of the most important players in the art world are part of my jury (Simon de Pury, Serge Tiroche, Shaune Arp, Sylvain Levy, to name a few), helping choose the artists of the future and I did it!  We are looking to expand to several cities with pop ups, a model I tested recently that works for ACAF, and look forward to the next New York edition in May 2020.