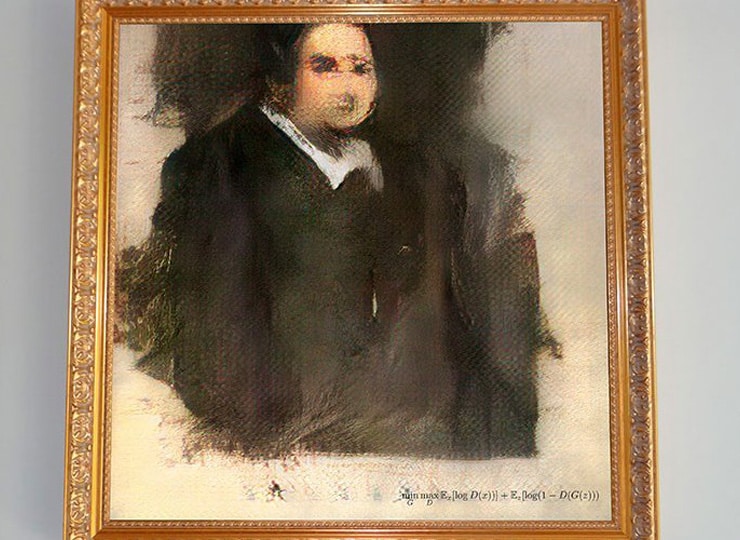 Christie’s have announced that they will be selling a work generated using AI at their Prints & Multiples sale set to take place from Tuesday 23 to Thursday 25 October. The work named Edmond Belamy, originates from a series of 11 portraits of the fictional Belamy family, created by the Paris Collective – Obvious. Obvious are a group of friends, artists and researchers based in Paris who view AI as a valuable tool in answering societal and philosophical questions. The project began a year ago and they have already amassed a fan base, including French Gallerist Nicolas Laugero-Lasserre. In an interview with ARTnews Laugero-Lasserre comments that the groups innovation was both ‘grotesque and amazing’, demonstrating the fascination and perhaps elements of confusion that is often felt when viewing works that aren’t created by the human hand.

Generative Adversarial Networks known as GAN’s were created in 2014 by Ian Goodfellow, a researcher in Machine Learning. A GAN works by putting two algorithms up against one another to perform training. A generator will then create new images by taking elements from images which are already in their training dataset, the discriminator then determines which of the images are real and which are generated. The generator is trained until the discriminator can no longer tell the difference. Very often AI artworks consist of recognisable features which can be slightly abstracted. Research which was undertaken at the Art and Artificial Intelligence Lab at Rutgers University showed that human subjects could not distinguish art generated by AI systems from art created by contemporary artists shown internationally at the top art fairs.

With an estimated value of £7,000, Edmond Belamy will be the first work generated using AI to be sold at auction and has already prompted a widespread reaction. Will the acceptance of a leading auction house such as Christie’s open the flood gates to more artworks generated using new technologies being circulated and sold, or will there be a feeling of resistance from the art world? Richard Lloyd, the Head of International Prints and Multiples at Christie’s commented in an article published online by Christie’s; ‘AI is just one of several technologies that will have an impact on the art market of the future – although it is far too early to predict what those changes might be.’

Although often effective, works generated using these technologies bring forward some fundamental questions – Can an algorithm really be capable of creativity in the same way a human is? Algorithms learn by identifying common features in data which is a process of recognition similar to the way the human brain works. The Obvious collective reference this in their signing of the artwork, instead of the artists signature they put the following equation:

In this case who is the real artist, the algorithm or the creator of the algorithm? The lines become blurred as the artist takes the risk of becoming the machine itself. It is recognised that similar comments were made about the camera years ago, it could therefore be speculated that AI generated works may slot into the canon of art far more seamlessly than previously thought. In a blog post Obvious refer to AI as a valuable tool in ‘allowing the maximization of the creative potential of humans’, a tool that will not overtake the human artist but can bring a new perspective to the art world. Artworks generated using AI can help highlight these new technologies and bring them to wider audiences. Lindsey Griffith who will be managing the sale for Christie’s told the Telegraph ‘At the moment, managing those tools requires rare skills and expensive technology/ But we can imagine that tomorrow these tools will be widely spread across the population’.

READ MORE: RECENT ADVANCES OF AI IN THE ART MARKETS

Cover image: Portrait of Edmond Belamy, 2018, created by GAN (Generative Adversarial Network), which will be offered at Christie’s in October. Image © Obvious