“We Exist for You” The Gallery Proposing a New Business Model 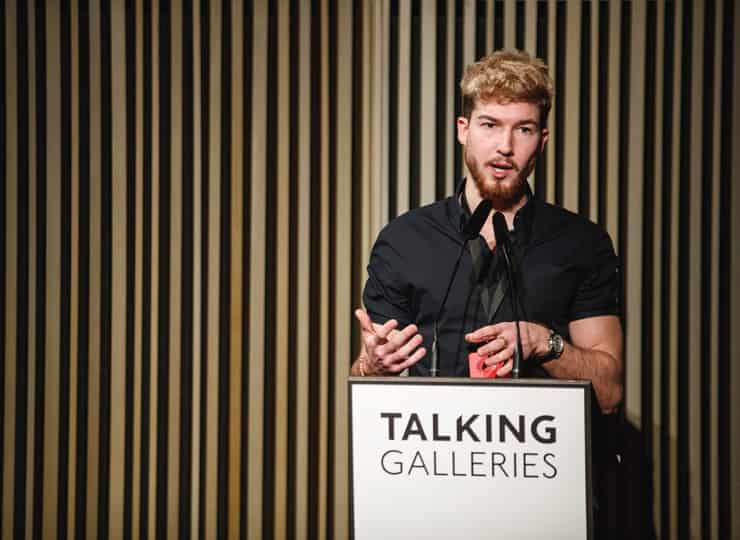 Unit London was founded in 2013 by Joe Kennedy and Jonny Burt, two artists and friends who share a mutual desire to break down barriers of elitism in the art world. We met with Joe Kennedy at their Mayfair space to discuss the concept behind the brand.

Both young and ambitious, Kennedy told us neither of them ever identified with the traditional art world. This spurred them on to start their own gallery which could provide a platform for the talented artists out there who do not have the exposure they deserve. He puts this down to them perhaps not being formally trained or simply not having the right connections.

In the beginning they had no financial backing or existing roots in the industry. They started with a pop-up space in Chiswick for which they relied heavily on social media to spread their message. Fast forward a few years, they have opened their Mayfair gallery in the former Citibank building on Hanover Square, next to Blain Southern and Hus Gallery. They also have a space in Covent Garden. Considering they started selling works in Chiswick for as little as £200 they have come a long way in a relatively short time, but according to Joe they have always gone above and beyond their means. They currently represent 12 artists exclusively and have a further 30-40 artists whom they work with.

When we asked about their client base Kennedy told us it was varied. Historically collecting art has been linked with status, but Kennedy says he finds majority of their collectors are looking to be culturally enriched and educated in art. Lots are from Silicon Valley and LA and have little time to spend on building their own collections, therefore, they will rely on Unit to help them. They also have many seasoned collectors who come in and know exactly what they want as well as first time buyers and young collectors who are keen to understand the artists and often want to speak with them directly. Kennedy also stressed the importance of social media as an integral aspect of their brand which they believe is the best way to reach a younger audience of collectors.

READ OUR ANALYSIS: HOW MILLENNIALS ARE CHANGING THE ART WORLD

Crucial to their gallery model is the combination of an online and offline presence. Kennedy told us that for them this is a “constant paradox” as although they make 80% of their sales online the physical gallery space is still essential to the brand. Additionally, it is detrimental to them maintaining strong relationships with their core collectors. In this sense they do not veer far from the traditional gallery model as they admit the brand and gallery would not be what it is without a physical space. Kennedy also told us that at the moment they are really focusing on getting their artists institutional engagement, getting their works in museums and galleries.

Kennedy did go on to ruffle a few feathers at this year’s Talking Galleries Symposium in Barcelona with his presentation “In the Consumer-Centred World, How do Galleries Remain Relevant?” Here, he talked about the galleries aims and drive which are in stark contrast to fundamental aspects of the traditional gallery structure. For instance, Unit looks to bring their artists to a global mainstream audience, not just a select few, they are driven by the consumer, surpassing the traditional galleries role as the “taste-maker.” This may cause offence to some as art is not usually linked to mass consumption, instead it is viewed as exclusive and elite. They also represent artists purely based on their work, ignoring preconceived social ideas of what they should have accomplished or where they may have trained as an artist. Finally, Unit position themselves as more of a brand than a gallery, Kennedy referenced business models like Uber and Spotify which have been created and essentially are controlled by the consumer – he likens this to what they are trying to achieve at Unit.

Finally, we asked Kennedy what he was looking forward to in 2019. He told us that they will be doing their first ever show in Asia which will be in Shanghai. As a gallery they already have a solid client base in Asia where collectors seem to have different motives to those in the West. Kennedy also explained that the market over there is extremely exciting, with many talented artists and pioneering collectors. This venture will mirror London, starting with a pop up space with the intention to eventually open a permanent location.  As a brand Unit will also look to delve into other industries such as fashion, film and music.