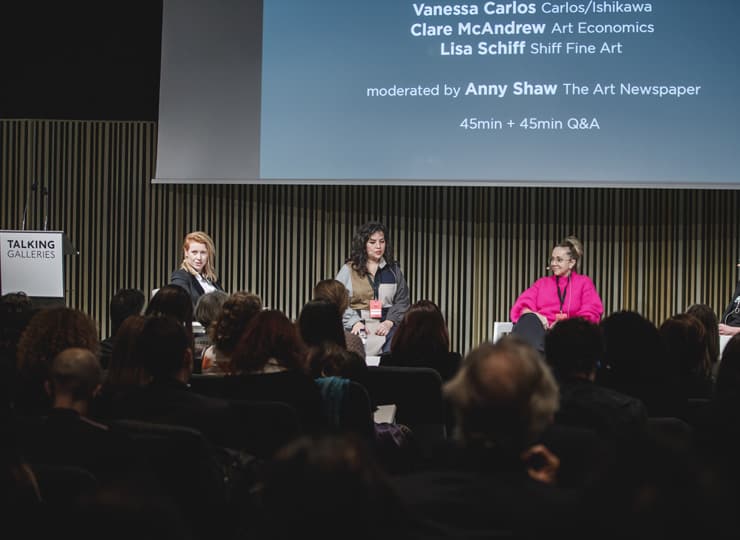 Talking Galleries latest symposium (21-22 January 2019) was hosted at the Museu d’Art Contemporani de Barcelona (MACBA) for its seventh year. Once again, the dynamic conference brought together influential figures in the art world, spurring on great debate and discussion. A central theme addressed during the first day in particular was the complex and important issue of female artists facing gender imbalance across the art world. We spoke to Talking Galleries about how the two-day conference panned out.

Attuned to the most important debates of our time the programme of speakers was put together by the Director of Talking Galleries, Llucia Homs, and this year the event itself was attended by over 200 people. In the past typically, the symposium has been attended by gallerists as a majority, but this year as the theme focused on the art market in a much broader sense it was attended by art advisors, fair professionals, artists as well as art platform and services representatives.

Women Artists on the Market.

A panel discussion on the first day, “Women Artists on the Market” was moderated by Anny Shaw correspondent at The Art Newspaper, who was joined by London based gallerist Vanessa Carlos, art advisor and curator Lisa Schiff and economist Clare McAndrew. What was made alarmingly obvious was that there is still a dramatic gender imbalance in the art world, Clare McAndrew’s highlighted this clearly through a series of data that will be published in March as part of the Art Basel and UBS Global Art Market Report. This included the statistics that only 16% out of the 3,050 artists on Artsy’s database are female. Additionally, there are far fewer female artists being represented by more than one gallery, and as people in the industry will be aware this usually equates to having more success as an artist. We are confronted with the sad reality that the top selling artists in the UK and US are all male, nine of them being white male. McAndrew elaborated on her findings saying:

“There are two sides of the story. Firstly, it’s a cultural bias, there is gender discrimination: women get paid less, as general studies indicate. There’s also a discrimination of the gatekeepers. Secondly, we also have to look at the supply side. There are some supply issues at play. That’s also an outside bias. And that’s the more difficult challenge we face.”

Despite the re-discovery of pivotal female artists within the art history canon and the conscious effort being made by many to give a prominent place to females in history, we have not seen reflection of this in sales, suggesting there is a need for a structural change in the art market’s system. Vanessa Carlos, a gallerist reflected that she has seen a change in the number of male artists engaging in the conversation, with many more coming forward speaking out about the unfair biases both women and other artists face. Schiff who is an art advisor commented that she felt because the industry has been male dominated for so many years she found it incredibly hard making a place for herself, and therefore did not have the capacity to help her female counterparts at the same time. She added that now as more people are speaking out about the issue, times are changing and women are helping one another much more. Perhaps with key players encouraging this vital “shift” in the art market we will start to see a more level playing field. There was a more encouraging moment on day two in the panel discussion on “Africa’s Growing Art Market” where Peter Gerdman, the head of ArtTactic showed through his research that three out of the top five African artists at auction are women, with Marlene Dumas coming out on top.

Is there a need for the restructuring of traditional gallery models?

Talking Galleries told ArtMarketGuru that the talks that caused the most social media engagement were those given by Joe Kennedy, Co-Founder of Unit London and Eugenio Re Rebaugengo Founder at Artuner, who both shared new ideas about the restructuring of traditional gallery models. Eugenio Rebaudengo’s talk was entitled “Art Market Hybrids, Embracing New Business Models”, and looked at ways new business models like Artuner are providing an alternative to the traditional gallery model. Artuner has a strong online and offline presence, holding exhibitions online and in pop up locations with no permanent gallery space. Re Rebaugero suggests that this nomadic model could be the answer to the gallery crisis at a time when gallery rents are at an all-time high and simply not an option for most small to mid-size galleries.

Whilst Joe Kennedy’s presentation “In the Consumer-centred World, How Do Galleries Remain Relevant?” referred to Unit London’s business model for which their slogan is “we exist for you.” Kennedy used examples such as NIKEiD, whereby the consumer is allowed to design their own shoe, and the Netflix original series Bandersnatch where the viewer controls their own destiny. Through using these examples Kennedy showed Unit’s objective is to engage with mass mainstream audiences whilst valuing them more. Kennedy’s controversial suggestion of introducing a new gallery model based on the consumer did not go unchallenged by audience members who seemed to support more traditional gallery models which they suggested give the artist more protection.

The international emergence and recognition of the African art market.

With the demand for contemporary African art on the increase and widely recognised as an art market trend for 2019 it was interesting to hear the panel discussion “Africa’s Growing Market,” moderated by Bomi Odufunade, Director of Dash & Rallo Art Advisory, with speakers Lerato Bereng, Associate Director of the Stevenson Gallery, Touria El Glaoui, Founding Director of 1:54 Contemporary African Art Fair and Peter Gerdman, Head of Market Analysis and Products at ArtTactic. Sales of African art at Bonham’s and Sotheby’s are up by 42% compared to 2017, making the African Modern and Contemporary art market one of the fastest growing art markets this year. Additionally, and as previously mentioned with female African artists, it was shown that all African artists are receiving more attention internationally from both galleries and collectors. On the other hand, Touria El Glaoui who has founded 1:54 Contemporary Art Fair, an intimate fair which currently includes 43 galleries, commented that although the African art market is growing and gaining the respect it deserves it is still having to build “from the ground up right now.”

In conclusion the two-day symposium seemed to spur on some great debate and what made it more interesting was listening to the potential solutions (and problems!) that were suggested. The overall messages of the day seemed to be: