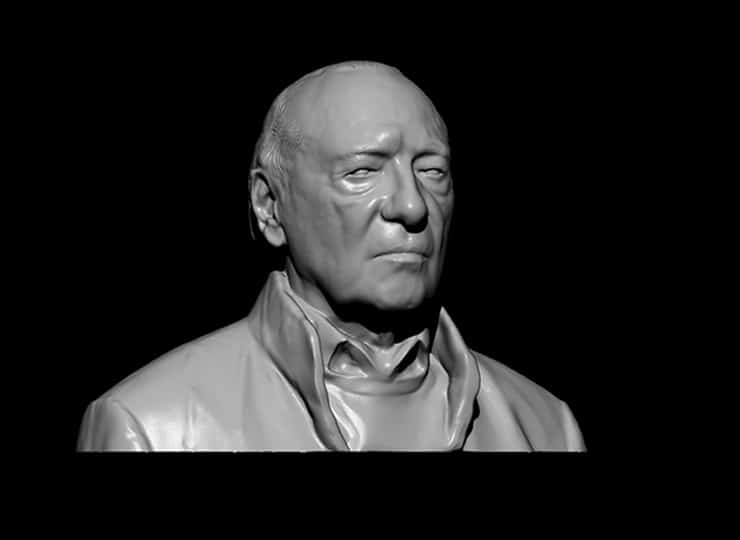 3D printing is already revolutionizing many industries, from healthcare to art. The technology involves injecting layers of material into a chamber to create a three-dimensional rendition of an object intricately designed on a computer.

The technology is advancing in leaps and bounds. Now, 3D printing enables millions of artists worldwide to produce intricate pieces and develop new art forms. Not to mention, it makes the creation of art easily accessible to anyone.

Professional artists are already busy creating 3D printed masterpieces that challenge us to see the world from a whole new perspective.

Dutch painter and sculptor Danny van Ryswyk is one of several artists who use 3D software to bring his fascination of the paranormal and supernatural to life. He combines traditional techniques with digital technologies to produce Burtonesque 3D characters. Each piece is sculpted in a way that’s reminiscent of clay or stone sculpting, but everything is carried out in a digital environment. The artist then sends the digital sculpture to a professional 3D printer, who prints his artwork in high detail. Once printed in 3D, van Ryswyk paints his sculptures using age-old techniques.

It usually takes van Ryswyk weeks or months to finish a single sculpture.

Tactile Art for the Blind

The Prado Museum, one of the most popular art galleries in Madrid, recreated some of Western art’s greatest masterpieces into textured 3D paintings, making them accessible to blind and partially sighted visitors.

Artists who were themselves blind or partially sighted used a 3D printing technique called Didú to recreate masterpieces by artists such as El Greco, Artemisia Gentileschi, and José de Ribera. Developed by Estudios Durero, the method involved optimizing a photo of the painting to represent its physical details. The image is printed in 3D and then treated in a 12-hour chemical process. Using such an intricate process, the Prado Museum hopes that these 3D reproductions make it easier for blind individuals to perceive each of the six paintings in the exhibit.

UK-based artist Lorna Barnshaw used an array of 3D technologies to create self-portraits, mask-like sculptures of the human face. In a series called Replicants, she produced three different pieces, each of which was eerily sub-human. Barnshaw’s replicas appeared life-like as well as artificial in that they resembled what a human face would look like with computer glitches.

Barnshaw used different applications to create each print, but she used the software as little as possible. Her 3D renderings were then printed, bringing the digital simulations into the physical world.

Danit Peleg is one artist who’s pushing the boundaries of fashion with 3D-printed clothes. Her work has been showcased on runaways and even at the Paralympic Games in Rio. Since 3D technology still has its limitations, for quite a long time her pieces were only available for the runway.

That motivated Peleg to create a platform where more consumers can get their hands on 3D-printed fashion. She started an online store where people can purchase and customize 3D renderings of their own clothes. It takes Peleg 100 hours to create a single jacket. For that reason, she can only produce a limited number of pieces. Peleg believes that 3D printing will transform how we purchase our clothes. She believes that one day, consumers will be able to download their clothes and print them at home.

3D printing technology may be one of the hottest trends today—but it’s not a fad. It’s poised to change the way artists create and the way people consume art. There’s a myriad of opportunities to explore, and who better to push the boundaries of 3D technology than artists challenging the status quo?